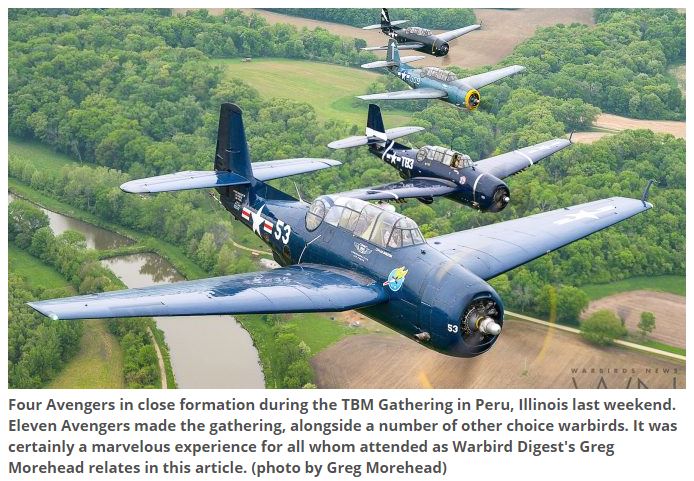 Imagine what it would have been like to stand on a carrier deck as a squadron of World War Two Navy torpedo bombers prepare for a mission, their engines simultaneously running as the pilots scan their gauges and test their flight controls. In 2018, there is only one place in the world where one could experience the ground shaking rumble and awe inspiring din that 19 year old flight deck crewmen witnessed daily on US Navy aircraft carriers during WWII. Now 75 years later, very few of those brave men are still alive, yet a few were among the many onlookers. 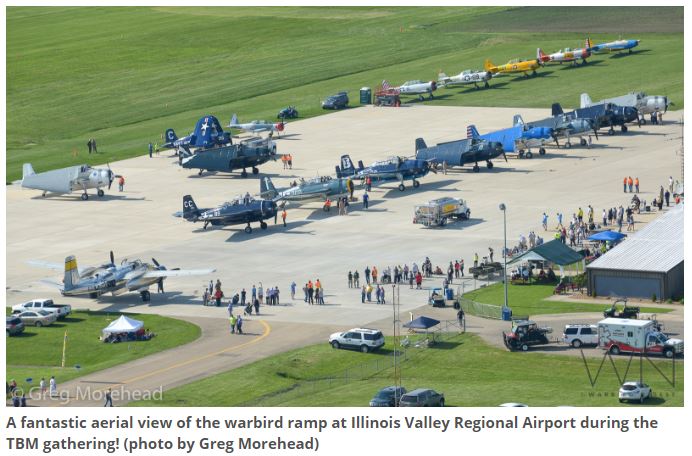 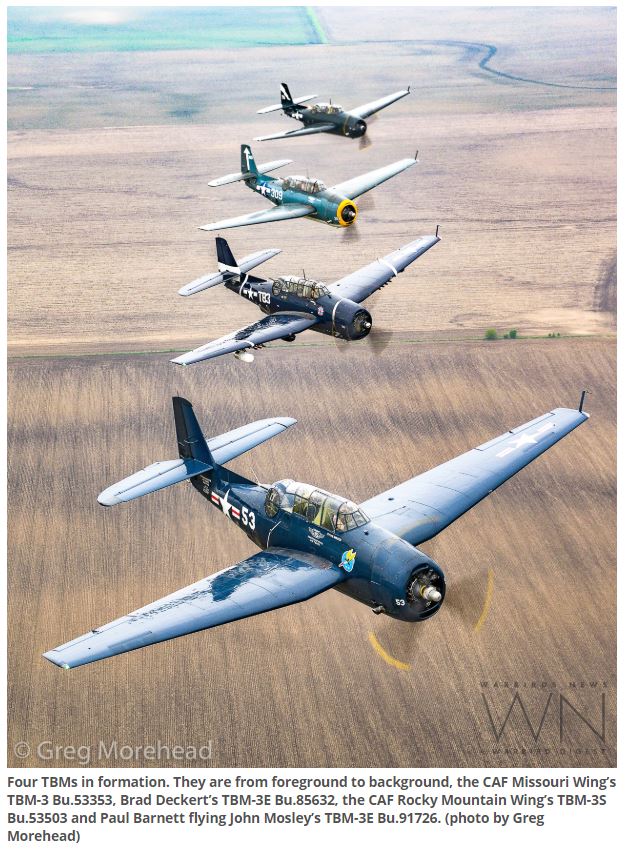 What started as a birthday party for TBM owner Brad Deckert three years ago has grown to become a significant warbird gathering in Northern Illinois; this year dubbed the “TBM Avenger Salute To Veterans.” Taking center stage at the event were eleven TBMs that were parked side by side at Illinois Valley Regional Airport (KVYS) in Peru. They stretched from one end of the ramp to the other, while an impressive collection of other warbirds filled out the ramp, including: two F-86 Sabres, MiG-17, A-26 Invader, F4U-4 Corsair, FM2 Wildcat, Boeing Stearman, Nanchang CJ-6, six T-6 Texans, two T-34s and a Fairchild PT-19. It is an amazing feat to gather about half of the country’s actively flown TBMs in one location, and another feat to attract roughly half of the local population. The Peru/LaSalle combined population is nearly 20,000 and about half that many people showed up to watch warbirds and honor veterans.
Brad and Jane Deckert, owners of combat veteran TBM-3E BuNo 85828, are active warbird operators who are loved within the community. The “friendship factor” is a major reason fellow TBM owners have been drawn to the Deckert’s hometown hangar, although there are a few other considerations that encouraged owners to invest their time and money to make the journey. 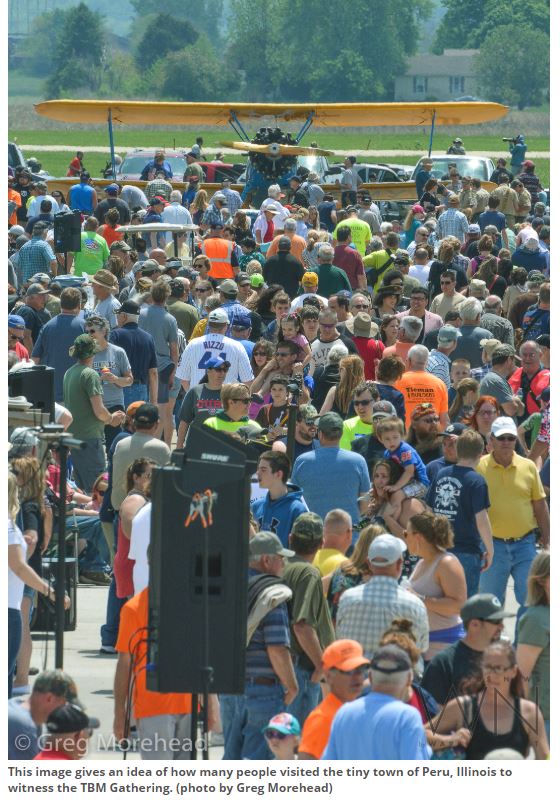 Operating a rare, 75 year old airplane requires financial resources, a broad skill set, and extensive aviation experience; however, learning the many pitfalls and solutions of operating a particular type of aircraft can only come through firsthand experience. Owners shared their experiences and asked questions in a “round table” discussion moderated by John Lane, who operates Airpower Unlimited, the well known restoration and maintenance shop in Jerome, Idaho.
Taking advantage of a great learning opportunity is always worth the time, but the money required to attend could have been a deal breaker for many TBM owners. The financial support of local government and businesses made it possible for TBM owners in distant locations to make the journey. The city of Peru was impressed with the 2016 event and saw the benefit as their community showed up by the thousands, prompting a financial commitment that was translated into fuel necessary to feed the voracious appetites of so many Wright R-2600 radial engines. If not for local financial support, this amazing event would not be possible. Translating the donations into necessary items, and managing the logistics of a complex public event was successfully accomplished by the airport’s FBO, Midwest Avtech, managed by Chuck Studer and administered by airport staff and volunteers.
Warbirds and veterans go hand in hand and people who love the hardware have an equal affinity for the men and women who go into harm’s way under the American flag. Veterans are honored at every air show, but this modest airport and community presented a thanks to veterans that was second to none thanks to Bill Miller Sr. and Dave Lourie. Prior to the flying portion of the event, two long rows of American flags were held by willing conscripts from the crowd. Smiles, waving hands, and tears greeted the 400 veterans from all branches of service as they walked down the flight line, between the flags that gently rolled and whipped in the breeze. 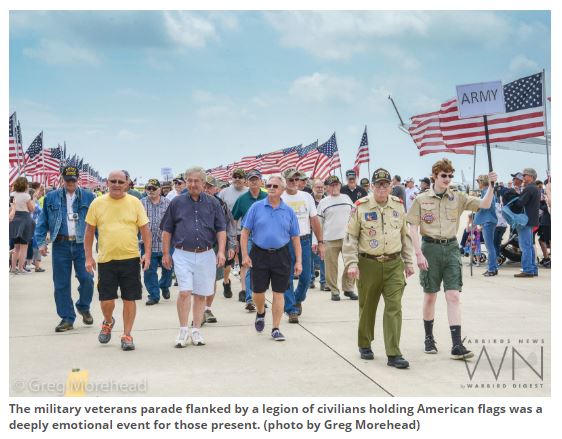 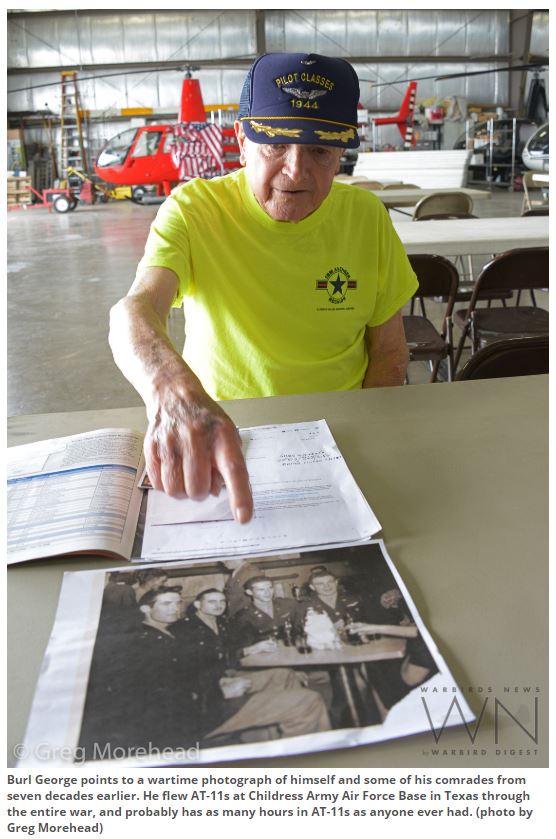 For various reasons unrelated to the event, the number of aircraft planning to take a spot on the ramp was slightly lower than scheduled, which is pretty standard for a warbird gathering. Aircraft break and weather does its best to remind us there are greater powers. Despite a few no-shows, the sky was buzzing all afternoon. Some TBMs were attending the gathering for the first time and a few from previous years were absent, netting eleven. They included: 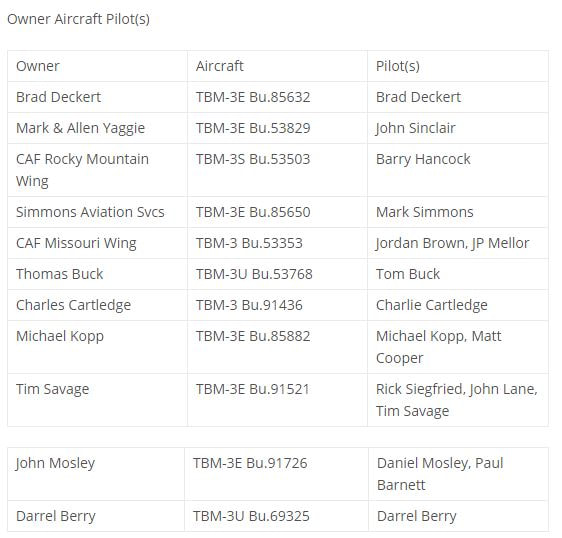 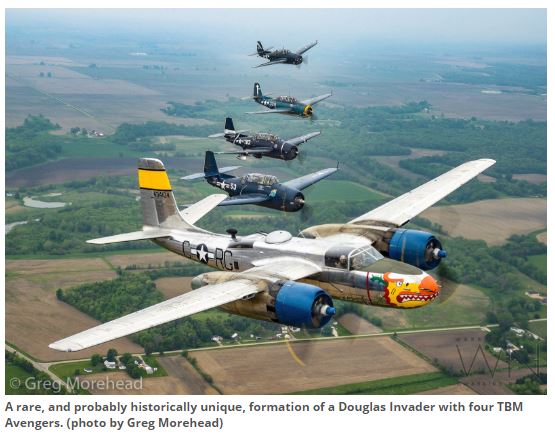 Tim Gillian, a well known T-6 pilot and owner, expertly described the events of the day for the spectators. Four TBMs launched and joined up for a missing man pass to officially open this Salute To Veterans. Three T-6 Texans then joined up and showed the crowd various formations. Gillian described each pass and how the pilots train and fly today much as cadets did 75 years ago. T-6 lead pilot Rick Siegfried had to stand down due to a mechanical concern, leaving the flight to John Shuttleworth, Doug Partl, and JP Mellor. 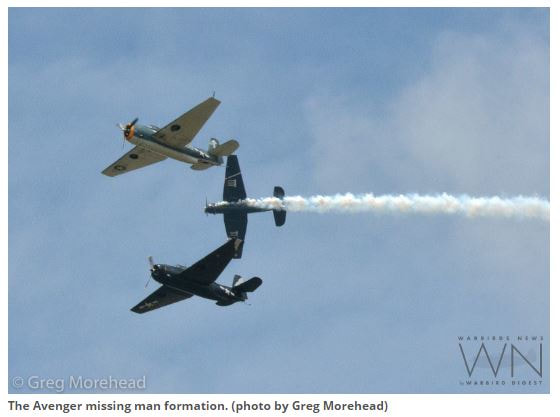 While most spectators did not know the special significance, warbird enthusiasts looked on in anticipation as John O’Connor flew in and made several passes in his newly finished ‘AU-1’ Corsair wearing a unique gray paint scheme before departing the show without landing. Then Mark Novak and Tim Savage launched in Savage’s A-26 Invader as Mike Gillian arrived on the scene in his FM-2 Wildcat. 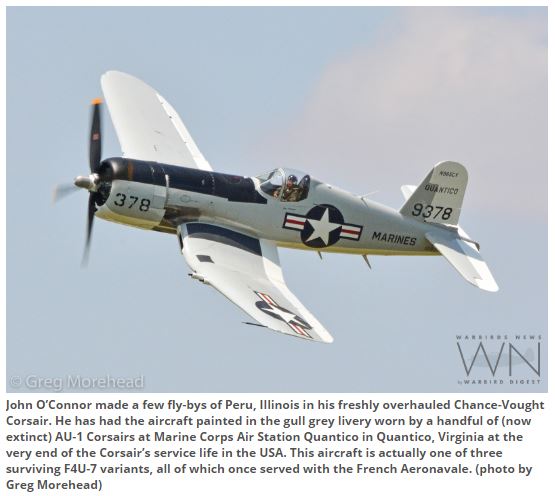 Jet fighters are always top crowd pleasers, so all eyes looked on as Paul Keppeler in his F-86 and Jeff Kaney in his MiG-17 launched for a jet adversaries demonstration, making some beautiful formation and hi speed solo passes. While the jets kept the crowd looking skyward, Darrell Berry taxied out in his magnificent TBM-3E. Once airborn, Berry joined up in formation with two T-34s from his collection. Both T-34s trailed smoke as each took opposing wing positions. The “vic formation” gave photographers ample opportunities to grab some great photos while Novak and Savage taxied out and took off in the Invader. Paul Ehlen took off in the crowd favorite F4U-4 Corsair and Mike Gillian took off in his gorgeous Wildcat. A unique formation resulted; the A-26 took the lead position with the Corsair on the right wing and F-86 and Wildcat on the left wing.
The finale of the event was the mass start-up, taxi, and flight of ten TBMs. The rumble was felt as much as heard when all ten engines were running at the same time – an awesome experience. The young generation learned that day that a past generation had things that blew the top off the “cool meter.” One can imagine the surprise of a young person as an Avenger began to taxi and those huge wings unfurled directly in front of them. One by one the Avengers took off, their flamingo like gear folding outwards into the wings during climb-out. Four of the big birds joined up in formation, including Barry Hancock in the Rocky Mountain Wing’s airplane, Paul Barnett in the Mosley TBM, John Sinclair in the Yaggie TBM, and Rick Siegfried in Tim Savage’s Avenger. The balance of the gaggle followed each other around the pattern so there was always an Avenger rumbling past.

That evening as pilots, crews, volunteers, and VIPs mingled, Airport Manager Chuck Studer was speaking with media as friend and TBM owner Brad Deckert stood nearby. Chuck said, “The veteran parade was so well received that even if we didn’t fly the TBMs, it was still a big success.” Brad gave him a look that only a close friend can get away with and said with playful sarcasm, “Oh, okay. Thanks a lot.” Of course the friends were teasing and clarification was unnecessary. One cannot witness the flight of a warbird without imagining the world and the men when they were instruments of war, and the sacrifices made in epic struggles of life and death. Tim Gillian, the event’s emcee , shared, “Already there are many photos online and one was very moving; a World War Two veteran had his hand on our airplane, with the flag flying over his head, and his head was down. It was moving.” That one image captured a powerful moment for an aging American hero, one of many experienced during the successful 2018 TBM Avenger Salute To Veterans. 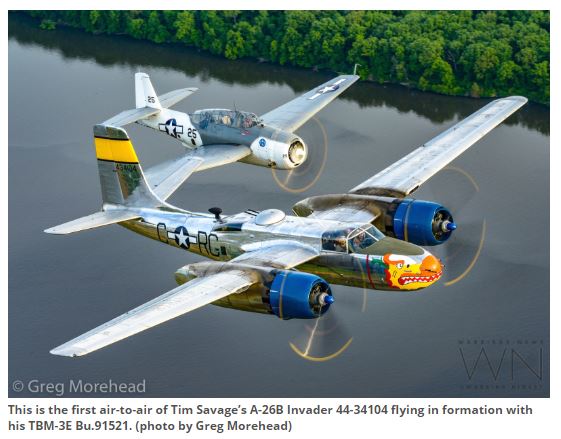 Addendum: When WarbirdsNews asked about the event, Brad Deckert commented, “The TBM gathering/salute to veterans was a huge success by all measures. We have an increasingly uncommon situation here in Peru Illinois where we have tremendous city, airport, and community support. I have never been associated with anything quite like this anywhere else. We couldn’t have picked a better venue to have this one-of-a-kind event. I think we can look forward to [similar events for] many years to come. I would also like to send out a special thanks to the non-TBM warbirds that show up and add so much….”
WarbirdsNews would like to offer our profound thanks to Warbird Digest’s editor, Greg Morehead for providing this terrific article, and the marvelous images within it. We thought our readers might also like some of the additional images from Greg’s photo-flight in Jordan Brown’s C-45 camera ship (many thanks to Jordan too!).