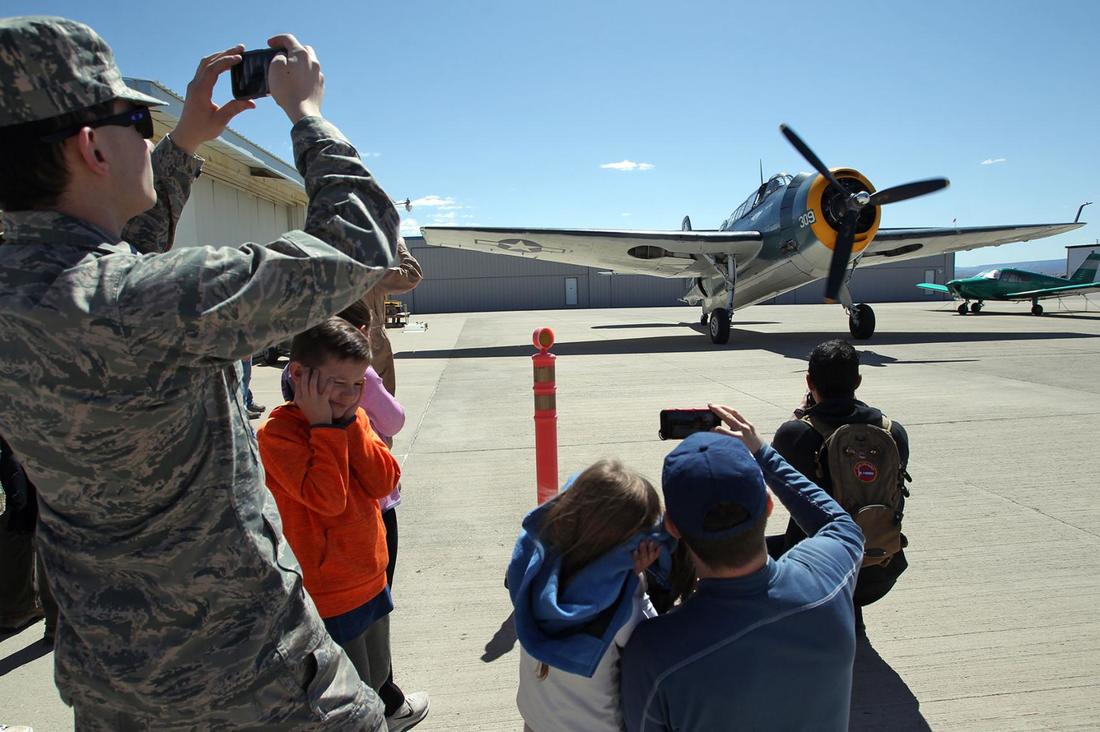 Adults shoot videos and children cover their ears as a 1945 TBM Avenger 3-E "309" taxis up to the Rocky Mountain Wing of the Commemorative Air Force's building at the beginning of Saturday's national listing celebration of the plane by the National Register of Historic Places at the Grand Junction Regional Airport. The TBM "309" is one of only two planes that still fly out of the six aircraft that have received this distinction.
​McIntosh, who also served in the Vietnam War and during the Cold War, said the Avenger was his favorite aircraft to fly.  "It sure does make me feel good to see it again," he said. "It's beautiful."

Taylor said he hopes the new national designation will draw more attention to the Avenger and other historic aircraft at the wing's museum.

"It's a national treasure right here in Grand Junction," Taylor said. "We've been here for 30 years and not many people know that these treasures are here. It's about keeping the memory and the can-do spirit of the United States alive."

Avenger torpedo bombers came to prominence in World War II and are credited with turning the tide of the war in the Pacific, according to Taylor.

Grand Junction Mayor Rick Taggart told attendees that he was extremely proud and pleased of the Avenger's designation, which was announced in November.

"We do need to keep commemorating our veterans, who have had so much of a positive influence on our community and our country," Taggart said.

Taylor said he hopes the national historic designation will boost donations and museum attendance as well as open the door to grants. Planes like the Avenger are costly to maintain, Taylor said, because repairing or replacing parts often means making them.

The museum is open from 10 a.m. to 2 p.m. every Saturday and by appointment. For more information, visit rockymountainwingcaf.org or call 256-0693.