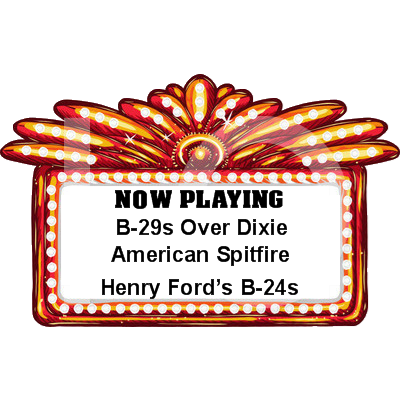 B-29s from Georgia:  Building the Superfortress - 1944
After the Japanese attack on Pearl Harbor on December 7, 1941, the Roosevelt administration decided to build additional aircraft-manufacturing facilities in the nation's interior, away from vulnerable coastlines. With its excellent railroad network and an established airport (Candler Field), the Atlanta area was an ideal location for new aircraft industries.

Based in Buffalo, New York, the Bell Aircraft Corporation had only about 1,000 employees when the United States entered World War II. About two weeks after Pearl Harbor, Bell learned that the government had selected its company to build B-29s in the Atlanta area
.
The first B-29 rolled off the assembly line in February, 1944. Bell Bomber reached its peak employment of 28,158 workers in February 1945.
​
By the end of production, Bell Marietta had constructed 668 B-29 Superfortresses.

This is a fabulous video of one of the Greatest Generation's crash landing.  He had never seen the film of the episode and you could see all the memories return as you watch his eyes as he views the video.  This has to be one of the greatest moments in his life.  Every young person should be thankful that the heroes of WWII were proud to serve their country and many gave all that they had.

An 18 year-old just out of high school was trained to take pictures of damage done to German targets by B-17’s. He flew in a British Spitfire fitted with extra fuel tanks where the guns were. In other words, he flew over Germany unarmed...

WWII American Spitfire Pilot
This is probably one of the best WWII film clips out there. Stored for 61 years in two suitcases of 16mm home movies that were inherited by filmmaker William Lorton from his great uncle who served as a Flight Surgeon. Those suitcases contained 3 hours of war footage that included a compelling crash landing of a Spitfire in 1944.
Filmed in a 2005 interview with the now 83 year old pilot and seeing the expression on his face when he realizes it is him in the cockpit, is something you won't soon forget.
​
At 18 years old, he was all alone, behind enemy lines, with no guns, no escort, and he gladly did it.
They just don't make them like that anymore. It was truly the greatest generation and we owe them so much.

Click on the Free Ticket to see the movie
Ford's  Willow Run B-24s...

ABOUT 7min… Another great story from the time of the Greatest Generation
The long hanger at Willow Run, Michigan has a 90-degree turn in it so Henry Ford would not have to pay taxes in the next county.  That short end is being saved and restored today as a museum. The big hanger doors are still operational after all these years.

This is one of the best and most informative clips about a great American accomplishment, thanks to the Ford Motor Company during WWII.

Production began here 6 months BEFORE Pearl Harbor!  Henry Ford was determined that he could mass produce bombers just as he had with cars, so he built the Willow Run assembly plant and proved it.  This was the world's  largest building under one roof at the time.  This film will absolutely blow you away -- one B-24 every  55 minutes! -- and Ford had its own pilots to test them.  And no recalls!

ADOLF HITLER HAD NO IDEA THE U.S.  WAS CAPABLE OF THIS KIND OF  THING.

Click on the Free Ticket to see the movie